Lessons from a Storyteller, Artist and Dear Friend 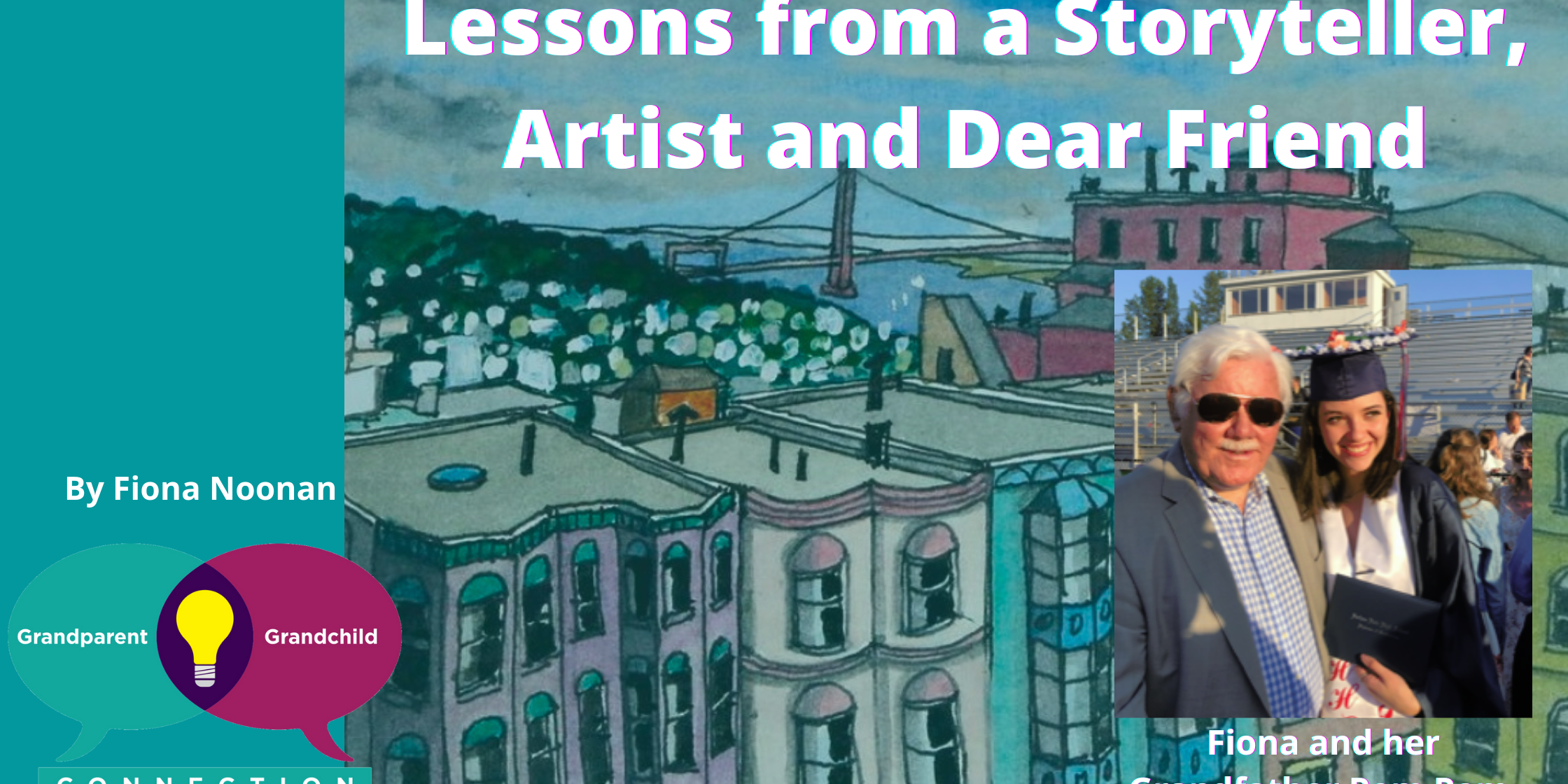 To me, grandparents represent a connection that lives inside you like an exhibit. Not solely to fill a role as a quasi-parent but to show others the beauty of a shared intergenerational relationship. I was about nine when I first began to draw connections from the large colorful paintings that hung on the walls of my childhood home to watching my grandfather, Pom Pom, scribbling on sketch paper on his sunny San Francisco terrace. I developed an immense admiration for the man behind the creations, growing a desire to perfect my own craft.

My Grandfather, the Artist

My grandfather has consistently demonstrated an ability to replicate scenes both in nature and urban cities, bringing about feelings of nostalgia transporting you to places that once felt distant and unattainable. Perhaps it was the comfort I felt hearing stories from his youth at the dinner table or his recognition of the importance of adventure and spontaneity for a child. Both have helped me understand things I began to face in the world, sometimes scary things, as I transformed and grew into a young adult.

Since I was a young Pom Pom has celebrated me being inquisitive, as I began experiencing complex and confusing things for the first time. I felt like being a sensitive child isolated me from being understood by other adults in my life. They wanted to entertain me rather than aid my understanding of why the world operated in specific ways. Having a mentor as a grandparent taught me the importance of intergenerational relationships, especially in adolescence.

My grandfather has reminded me that preparation and reaction are the two things I can control during my current transition into adulthood. I often remind myself of this vital lesson and have it documented on a small pink sticky note by my bed.

Throughout my early childhood, I began drawing and eventually exploring creative writing, investigating outlets to help soothe and express my feelings differently throughout the many transformational stages of youth. Pom Pom also turned to creative endeavors when he was a child, and by ten years old, he had become an artist. He was fascinated by Walt Disney and wanted to replicate characters like Mickey Mouse and Donald Duck. By the time he was 12, he had begun sketching and painting more original pieces and selling his work to shops around Limerick, Ireland.

At 93, Pom Pom still creates a holiday card every year, including an original design. He mails them out to relatives throughout Europe and the United States. He also sends them to colleagues and friends he has made throughout his career as an architect, working in dozens of countries all over the world.

Pom Pom reminds me what I value most in my connections with others: how sharing stories and advice informs and validates one’s feelings and how that reminds me that the most important relationship we have is the one with ourselves.

The Power of a Grandparent’s Unconditional Love

The promotion of building self-worth and understanding that you are unconditionally loved at a young age is essential. The connection between grandchild and grandparent is foundational in developing this comprehension. To me, Pom Pom will remain a center and source of indefectible life as his stories and creative spirit will continue in all of us as a family unit.

I spoke to Pom Pom on the phone earlier this week, catching up and interviewing him about his youth in Ireland, and I was left pondering the question: How can I continue the legacy of a strong storyteller like Pom Pom? I find comfort in knowing that my first blog post is a promising start.