What Sparks Your Core Values? 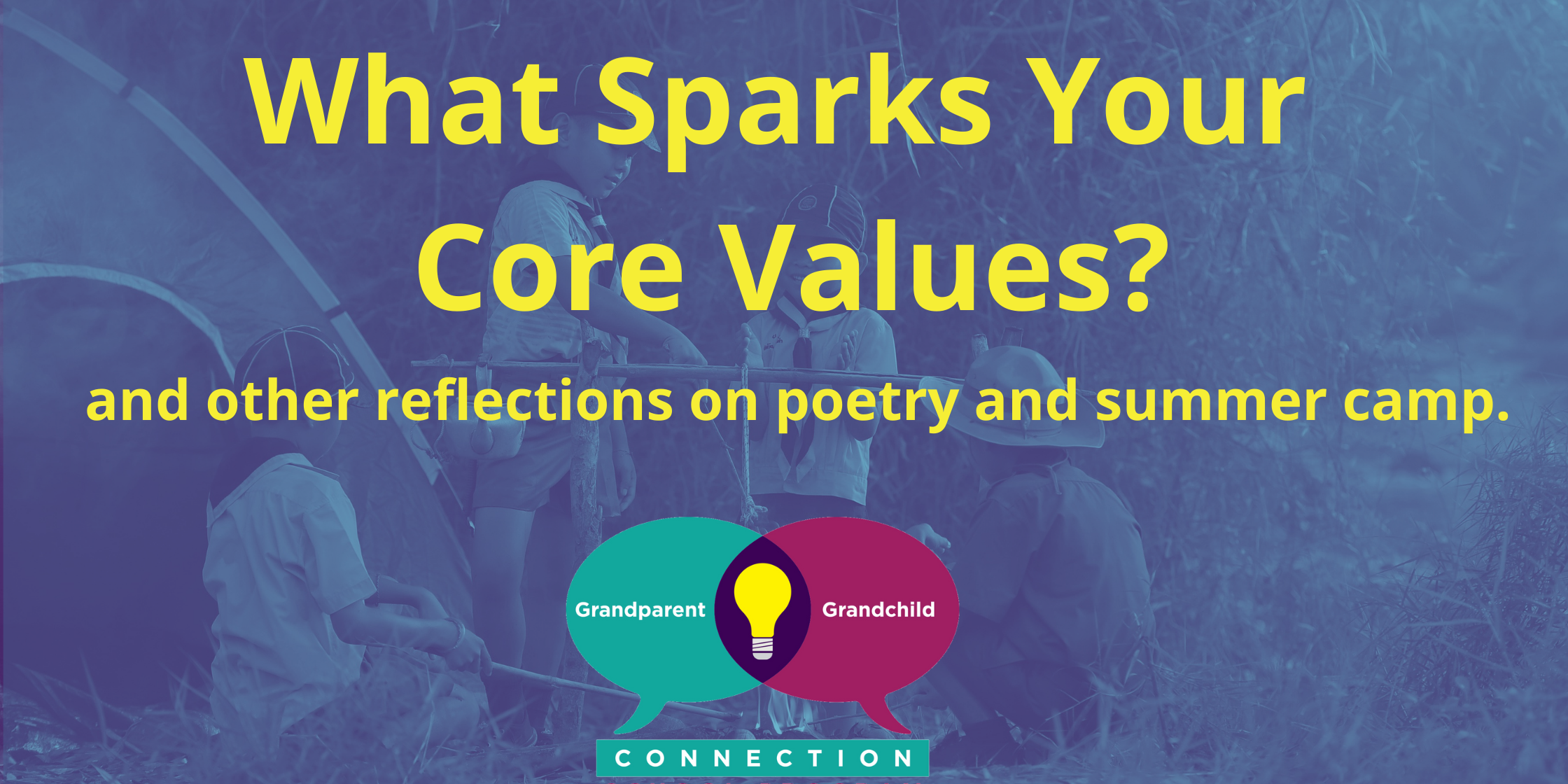 Poetry and Other Reflections on Summer Camp

This article was written for Grand Magazine. Read the original (and subscribe to the magazine) here: GRAND Magazine – Summer 2021 [36] (nxtbook.com)

Nothing like aging to spawn reveries on the meaning of life. Don’t get me wrong, I am so grateful to be here, spending time with family and contributing to the world, at 93. It’s just that I thought by now I’d have it all figured out.

You know more than you give yourself credit for.

Digging through a lifetime of old papers as I closed out and sold my condo last month, I came across a poem I had written in 1968 when I was director of a summer residential camp. I’ve only written three poems in my entire life, so I took notice. What was so important to the young man who wrote this?

I was heartened to see it related to what I so fervently still value: caring.

How do we empathize and care for those around us? The inspiration for the poem was this: I was working with a group of 11-year-old boys. They were picking on one of their cabin mates who had wet his bed. While already awful enough for the kid in question, the other kids were pretending to put diapers on. The counselors were not doing a good job of resolving it, so I intervened.

I met with the camper first and asked him if I could have a conversation with the whole cabin. He said yes, and we went together. Once inside the cabin, he pulled his t-shirt over his head to hide his shame.

“Has anybody here wet their bed that they can remember?” I started. Four boys raised their hands. The boy at the center pulled his t-shirt down. Then I explained how being picked on for this hurt the boy and his feelings. “How can we care about him?” I challenged them. The counselor, who was in the group meeting as well, stepped up after I left. The teasing stopped. A couple of kids made friends with the boy. And it was a better experience for everyone.

That’s when I went back to my office and wrote this poem:

How do I teach caring skills?

How do I make it simple?

Do I advocate, abdicate, dictate?

How do I teach caring skills?

What is the recipe?

How do I teach them how to see caring skills?

What did we lose?

How do you articulate not to hate?

How do you accommodate, stimulate, caring skills?

Maybe it just can’t be?

To get them to see how the other guy hurts, cries,

Maybe even without tears in his eyes.

How do you teach caring skills?

Maybe it takes too much effort to care.

There are too many hurts when it doesn’t work.

Hurts are not seen as the other person’s thing.

They are just hurts.

To the guy they sting.

How do you teach caring skills?

With the vantage point of a lifetime, I now approach the poem through lens of an investigator. Why did I connect so deeply with this situation? Maybe it was my own notion of feeling alone as a child. My mom died when I was three. Over the next four years until my dad remarried, I lived with my aunt.

What I most remember from those years was the metal alligator she kept in the fireplace near the alcove where I slept, that gave me nightmares. I flunked 2nd grade. And the teacher called us out by name. “They flunked!” she announced to the class. I went to boy scout camp at 10 or 11. I don’t remember it well, other than it was not a good experience. I felt like I didn’t fit in.

Perhaps that’s where I got the love of camping that fueled the rest of my life. How could I create a different experience for other children? One where they felt inspired and connected. I created my first summer camp for children of military families when I was stationed in Japan during the occupation at the end of WWII. I trained in group therapy as part of my master’s program at the Jane Addams College of Social Work. I was drawn to understanding group dynamics. Maybe the attraction to groups was how to make sure that the one skinny kid who wasn’t great at sports (but was a super dancer!) could fit in, and how those in charge could create the environment for that to happen.

Looking back, I’m grateful for the chance to have influenced communities when I held big leadership positions. But often it’s when you can have a positive impact on individual lives that it makes the most profound difference.