In My Grandma’s Kitchen–There Was a Fish Grinder 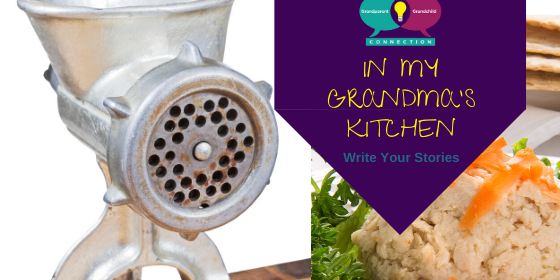 Grandma would clamp the grinder onto the edge of her kitchen table. She would boil the fish. My job was to take the fish after it cooled and grind it and pick out the bones. I was the bone-picker and grinder. While I was doing that grandma would be making a kugel and brisket, boiled potatoes, and vegetables. This was the makings of a regular weekend dinner in a Jewish household.

This was my special time with my grandma, just the two of us.  It started when I was 6 or 7 through grammar school. You see, I was the only son of her daughter who had died when I was three. I was the connection to the daughter she had lost. Even my Aunt Shirley, my mom’s younger sister who was just about my same age, wasn’t part of our gefilte fish making ritual.

Another treat of being at Grandma and Grandpa’s house was real Halvah. My grandpa would travel from where they lived on the south side of Chicago to go visit his buddies on the west side. They played penuckle and then he would go to the Jewish butcher where you bought raw hamburger—those days the butcher would weight, grind, and wrap it in a cardboard box. And grandpa would bring back real halvah in chunks—that delicious, sweet, sesame treat. That would be part of our dessert or whatever I could steal on the side. She wasn’t afraid to slap my hand or hit me on the shoulder with her wooden spoon—like if she caught me stealing a bit of halvah.

Grandma also made chicken soup with a real live chicken and vegetables. After cooking she put it in the old-fashioned refrigerator so the fat could rise to the top of the soup and she would scrape it off. I remember a mix of smells from Grandma’s kitchen. The boiling fish…Yuck! But then I helped her knead and bake the challah…mmmm! And she always had special treats for me, like cookies that she baked during the week. All the time—

I passed Saturday and Sundays with my grandparents. My grandpa was a colonel in the Russian army and fought in the rebellion. Grandma had a Russian accent. She would wear a common housedress, nothing fancy. And she would often have her hair rolled up in curlers on the back of her head.

“Jerralah,” she called me. Grandma wanted me to herself on these special visits. I think because I was the son of her daughter. Her heart was often heavy after her daughter, But I was the product of that, and she yearned for that connection. And I did too.

This post is part of the Write Your Stories series I’ve launched with JCCChicago. Sign up to receive writing prompts twice a week through Father’s Day. Learn more and sign up here.