My First Job: The Paper Route 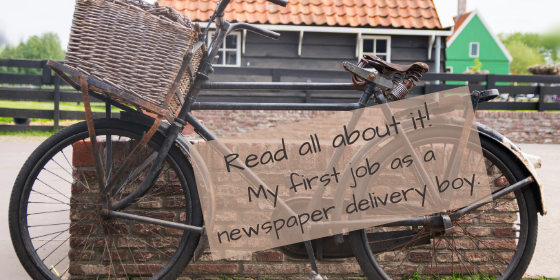 When you’re 13, which put me in 8th grade, you’re able to get a working permit. I’m guessing my mom went to the Alderman’s office to get it. That was the first step to getting my first job.

I saved up about $10 from my allowance to buy an old bike, to get a job as newspaper boy. That was so I could earn and save money to get what I really wanted: a new bike.

There was a bike store not so far from where I lived. I told the owner how much money I had to start. “I have some used bikes for $10,” he said. He showed me some bikes. They were all old and ugly. I told him I needed a basket too, to carry the papers, and he said he would throw that in for free.

Here’s how the paper route worked.

There was a man who had a little store. The Chicago Herald American would drop off the papers and he would bring them into the store and get them ready for the boys to deliver. He had a route open near where I lived. I wanted a route near my house, so when winter came I could walk it, if needed, in the snow. He gave me a ring with weatherproof cards. Each had the name and address of a subscriber on my route. I picked up my subscriber cards and papers and delivered them all after school.

I don’t recall a Saturday paper, but they had a big Sunday paper, like you get today. I would get up early on Sundays and go to the store. It was my responsibility to insert the ads, magazine sections and such into the paper before delivery.

You could earn a little extra money on Sundays by hawking the extra papers. I knew the Chicago Herald American wasn’t that popular, so I would try to trade my extras with the boys who delivered the Chicago Tribune. “Get your Herald American! Get your Tribune!” I would shout the headlines as I road my bike along the residential streets. “War in Poland…Read all about it!” And some people would open their doors and shout for me to sell them a paper.

Once a month you would go door to door to collect what they owed. I brought the money back to my boss, and that’s when I got paid.

My goal was to raise $25 to $30 get one of the shiny new bikes they had in the basement at Sears. I started the route in the fall. I planned to quit as soon as I had enough. And I was hoping it was before winter, so I didn’t have to keep riding in the cold!

I finally got my brand new bike. I loved that bike. It had shiny fenders, a bulb horn. I was so careful with it, I didn’t even ride it home from the store. Nor did I leave it in our rotten old garage. I brought it right up to my bedroom and kept it there.

And I never delivered papers with it!