I am 89 Years Old. What Can I do about Charlottesville? 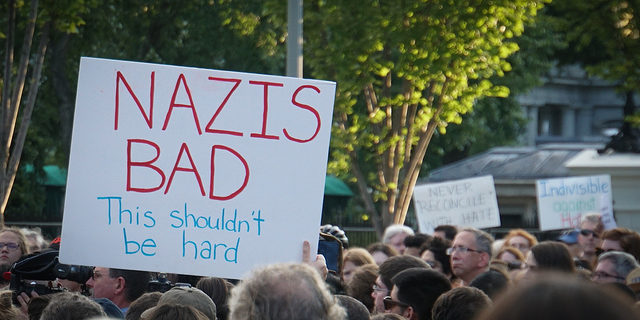 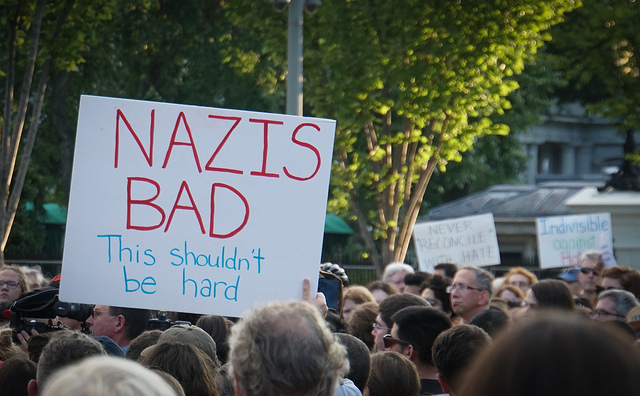 I watched the TV news–and witnessed the KKK, the Neo Nazi’s and the White Supremacists shouting their hate. It burns a hole in my heart and soul.

What can I do about it at age 89? As I struggled with this, the following thought went through my mind:

“When a Grandparent dies the doors to the library are closed forever.”

What’s in your library?

What is in my library that can help me now? My library has stories rich with life experience. Civil rights meetings and marches with Dr. Martin Luther King when he came to Chicago in the 1960’s.  As the General Director of the Jewish Community Centers of Chicago in the 1980’s, we took four trips to Poland with Board Members and staff. We walked in the Warsaw Ghetto and saw the gas chambers; we witnessed the horror of these places where thousands of Jews were murdered. I’ve taken 14 trips to Israel, some with JCC Board Members, some with staff, some with family and some on my own.

From these experiences I was highly motivated to teach my family and JCC members and staff Jewish values: Deep caring about our people and the people in our community who live with us regardless of faith or the color of their skin.

Create a Culture of Learning-and-Teaching

My wife of 52 years died 14 years ago. Since then my greatest love and concern in life has been my seven grandchildren (one of which is seven months old and is the first great-grandchild.)  The approach I have always advocated with them is “how do we, as a family, create a culture of Learning-and-Teaching?”

A culture of Learning-and-Teaching is where knowledge and experience are shared in all directions, from young to old or old to young; where individuals draw on what they do and what they care about and teach it to those around them.

Feeling lost, I began to focus on “how do I continue to build on the Learning-and-Teaching culture of my family regarding the issues that come from what took place in Charlottesville?”

So I talked to my adult children and with six of the seven grandchildren. They said “you have a right feel the way you do. We are worried also. We think it will get worse, but” they also yearned to know, “what can we do?”

I suddenly did not feel so alone, knowing that my family understood how I was feeling. One grandchild, now age 33, said “Grandpa you taught us to be concerned about these issues, and we are.”

It was then that it became so clear that the Learning-and-Teaching culture was embedded in our family and was beginning to express itself now.

My adult son sent the following poem to the 14 members of our family (It’s by Gideon Lichfield on Quartz, imagining how anti-Nazi Pastor Martin Niemöller’s poem “First they came…” might be rewritten for today):

First Trump came for the women
And I did not speak out
Because I was not a woman.

Then Trump came for the people with disabilities
And I did not speak out
Because I did not have a disability.

Then Trump came for the Mexicans
And I did not speak out
Because I was not Mexican.

Then Trump came for the Muslims
And I did not speak out
Because I was not Muslim.

Then Trump came for the gay, bi, and trans people
And I did not speak out
Because I was not gay, bi or trans.

Then Trump came for the Jews
And I did not speak out
Because I was not a Jew.

Then Trump came for the journalists
And I did not speak out
Because I was not a journalist.

Then Trump came for the judges
And I did not speak out
Because I was not a judge.

And now Trump is coming for the Constitution of the United States
And if I do not speak out, what am I?

Connecting to Family for Solace and Understanding

This piece and the ensuing comments from the family enriched me deeply. I also sent names of organizations that were taking action to them and suggested they Google them: The Southern Poverty Law Center. The Anti-Defamation League. The American Civil Liberties Union.

I suggested they will learn a great deal about what is being done about the matters we are concerned about. They may also want to make a contribution to one of them.

The grandchildren are the Board of Directors of the Witkovsky Living Legacy Foundation. Not a legal foundation, I originally created it as a way for us grandparents to fund their projects. But it was more a way to connect the siblings and cousins to each other—to support one another’s struggles and dreams. I suggested they may ask the Foundation to make a contribution to make a difference.

Perhaps the Learning-and-Teaching culture instilled in my family is in itself a very special contribution. For now, among adult children, spouses, grandchildren and significant others, there are 14 of us who are talking and thinking about what we can do.

As I have completed writing this I am no longer despondent of what I can do at being 89 years old.

At 89, this grandpa is still alive and the doors to the library are still open, with plenty of shelf space still to fill.

What have you talked about this with your family?