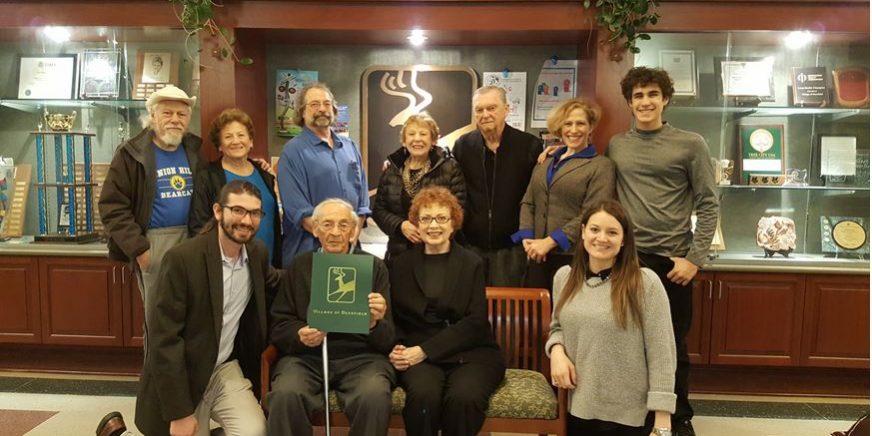 March 20, 2017 was named Jerry Witkovsky Day in the Village of Deerfield, to honor the long time Grandparenting Activist’s 89th birthday.
Mayor Rosenthal invited the public to join her at Deerfield Village Hall, 850 Waukegan Road, on March 20 at 7:30 p.m for the ceremony.
Read more about the honor and Jerry in the Chicago Tribune/Deerfield Review.

Jerry Witkovsky is an amazing Deerfield resident who has brought thousands of grandparents and grandchildren closer together and enriched their lives through his tireless passion behind his Grandparent Connection School Program.

Lifelong Chicagoan Jerry Witkovsky (MSW, University of Illinois) has been a beloved mentor to thousands of individuals and generations of families, thanks to 47 years of professional leadership – 18 of them, as General Director – of Chicago’s Jewish Community Centers.

In 1995, Jerry was named one of the city’s “Most Effective Nonprofit CEOs” by Crain’s Chicago Business Magazine.

Since retiring in 1997, Jerry has focused his considerable energies on grandparenting – helping multigenerational families work (and play) together to create a rich family life.

At 88, Jerry is a force of nature. His wife’s passing from cancer in 2003 was very difficult. But, he realized he could wallow or could keep on living. He has since authored a book, The Grandest Love: Inspiring the Grandparent-Grandchild Connection, recognized in Grand Magazine’s 2016 list of 13 Best Books for New Grandparents.

Jerry’s joyful commitment to his six grandchildren (ages 14-34) and to their parents, and his passionate belief in the transformative power of becoming a “Teaching-and-Learning” family, is at the heart of his book and the Grandparent Connection School Kit which he produced in 2016.

​GRANDPARENTS IN THE SCHOOLS

He has spearheaded annual orientation programs for grandparents in a growing roster of Chicago public and private high schools, designed to keep grandparents engaged with their grandchildren as they become adolescents, teens and young adults.  Schools with Grandparent Programs in Deerfield include Deerfield High School (300 grandparents attended the November Grandparents Day for Seniors!) and Shepard and Caruso Middle Schools.

VISION FOR THE FUTURE

Jerry now has launched an evaluation process to learn from the current programs and to see how the program could be built into a business model and scaled to set up Grandparent Connection school programs across the country. He continues as a tireless advocate for the power of grandparents to transform families and communities and to help pass values from generation to generation.