What I Learned from my Grandpa: Planting the Marigolds 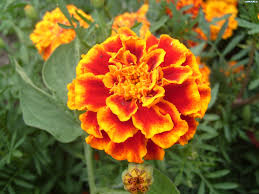 I was the firstborn of parents who grew up around the corner from each other in the Clason Point section of the Bronx – an Irish-Catholic neighborhood that teemed with children and with aunts, uncles and cousins.

Mom’s parents had eight children.  By the time I came along in 1947, I was their 20th grandchild so I didn’t represent anything new or exciting.  Grandpa Jordan was “happy-go-lucky” – meaning, he was usually drinking and only occasionally a working man.  I remember him packing tobacco into his pipe and watching the ballgame, or sitting in a chair in his garden, watching his vegetables grow.  He taught me how to eat a plum tomato right out of the ground:  first suck it clean and then add a sprinkle of salt, which he kept handy in the garden!  He was right – those tomatoes were delicious when they were warm from the sun.

To my paternal grandparents, however, I was a gift – the first grandchild and a girl, which was very exciting because they had three sons (all recently returned from the war).  They doted on me, and Grandma McLaughlin told me I was beautiful every chance she got.  Grandma mostly stayed home and prepared meals; it was not a time during which gender roles were examined too closely.  It was Grandpa McLaughlin who taught me life’s grand lessons, in small increments – about work, responsibility, community and play.

Grandpa sold insurance for Prudential.  Whenever I – and later, my brothers – would visit, he’d let us play with the typewriter, rubber stamps and spinning desk-chair in his home office.  After going door-to-door to collect very small premiums from his clients, he would sit at the dining room table and sort the bills.  He taught me to put them in order of value, to line them up (all facing the same way), to count them twice, and then to fill out the deposit slips.  Then we’d go to the bank, where he’d introduce me to all the tellers.

Grandpa would take me to Gansey’s Saloon, where I was allowed to order a Shirley Temple but could sit only at a table, not at the bar.  While he drank his beer, the bartender would fill up a quart jar for him to take home.  Afterwards we often stopped at the pickle-packer next door, and buy a quart of pickles and sometimes olives or pickled onions.  Here, too, he would introduce me; I don’t remember anyone else ever introducing me to adults, as a child.

I loved it when Grandpa would leave his coat-and-tie at home – I don’t think he ever owned a pair of jeans, work-pants or shorts – and take us to the beach to fly a kite.  He taught us how to make a tail for the kite from old rags, to RUN to get the kite in the air, and how to hold it so it stayed up there.  He often took us to the Bronx Zoo.  We loved the adventure of riding in his fancy sky-blue Buick and getting to decide which way to drive there, and what to see after we got there.  It remains one of my favorite destinations.

Best of all was when he taught me to garden.  He let me dig up the dirt to loosen it and then use my fingers to create two rows, and spread the marigold seeds as if I was sprinkling gold dust. Cover it up, pat it down and check on it every time you come to visit.  Those were my marigolds.   The other gardening chore was to trim the dead roses off the  bushes that climbed up the wall of the garage.  He let me do this all by myself!

And every morning he’d go out to the garden and cut a rose to wear in his lapel.

On very special occasions, we were allowed to spend the night at Grandma and Grandpa McLaughlin’s.   This was a huge treat because we got to sleep in the convertible sofa in the living room – in front of the television.  We begged to be allowed to get into bed as soon as dinner was over.  The best nights were the Saturdays when we watched the fights and got to root for the black trunks or the white trunks.  (I did not retain my love of boxing.)

Today I am a grandmother of four, ages six to ten.  They are growing up quickly. Technology makes them accessible even though they are thousands of miles away. They have so many more diversions than I had at their age – I’m not sure they would be enthralled by my memories of the marigolds.  They like to perform shows for us when all they’re all together and have me take pictures of their antics.  The next time they come over, they count the framed photos I display throughout the house, to see who has the most!  They enjoy when we do art projects with my “grownup” paints, tools and techniques.  They also like teaching me their latest Wii games, how to do new things (like play games) on my iPad and phone.

When I visit them, I have them take me on a tour of their classrooms and to meet their teachers.  For a long-distance grandparent, a tour of their home turf provides genuine insight into their world.  I find that their lessons are more sophisticated and self-taught than in my day. I’ve learned they know much more than I’d assumed.

Grandparenting is marigold seeds, kites and zoos; it is pictures, school events and gymnastics performances.  But really, it is so much more than that.  Hopefully I will leave my grandchildren the gift of feeling loved and confident, and of caring about the world beyond themselves. And the gift of good memories, as I have, 50 years hence.

Excerpted from The Grandest Love: Inspiring the Grandparent-Grandchild Connection