The Grandchildren Speak: A Life of Insatiable Curiosity 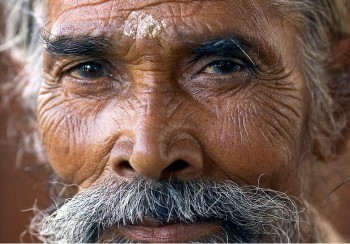 Jayendra Bhatt was a rickety old man at first glance. He would careen down our suburban sidewalk using his cane as if it were a comedic prop to make us grandchildren laugh. But “Dada” wasn’t rickety, neither in body nor in spirit. In his native India, he had been a scholar, a philosopher, a teacher–and a boxer. And although he appeared delicate in his old age, he still had the muscles to prove it.

Educated by the British in his native India, Dada would still ask us to “make haste” when he wanted us to hurry and “take heed” when he wanted us to listen, even after twenty years of living with us in California. He always had a book in hand, and every birthday card came with a classic novel, biography, book of poetry or textbook. He had read and loved them all. He had flipped through his books to give me my name, choosing a Sanskrit word, Foram, meaning “fragrance”–a name as unique as me being the first girl to be born in eight generations of his family. Even in his last moments, before dying of a heart attack in bed, he took his final breaths with a paperback resting on his chest.

After his passing, reading his books–pulled off shelves and out of nightstands and from under beds–became a way for our family to remember him. For me, it became a way to honor him, to inherit his restless pursuit of understanding life through literature. Today, I fill my walls with books–his and mind–and remember.

While his hours, days and years were filled by his insatiable curiosity, Dada believed that true happiness ultimately came only from simplicity, from peace within the heart after realizing the world around us. IN deed, every day he would ask me, “Are you happy?” I would respond, “Yeah, Dada, I’m happy.”

Then he would smile and say, “Good, that’s all.”